Stage in the age of television 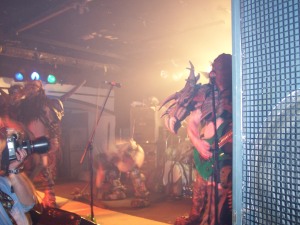 The last time I was at the venue, there was more dramatic costuming than this time.

A few days ago, I was invited to go along to see a new play at a new theatre. I’d been to the venue once, a few years ago, for a Gwar concert.

I won’t bother reviewing the play. It was dreadful.

There’s always something doleful about an empty music venue. The stale smell of dropped pints of lager, joined by a vague ammonia note of past incontinence, makes it more obvious that it is a place where people should be. The emptiness is somehow more solid. The absence of people recalled through the evidence that they had been here.

So it was an odd thing sitting in this new theatrical space. The standing area in front of the stage was filled with stackable chairs. The rest of the room stayed as it was, with big heavy wooden tables and benches. This was not a room for drama.

There are rooms for everything, architecture tropes to which we rapidly become accustomed. We all know, and can call to memory, a variety of basic rooms. The doctor’s waiting room. The child’s bedroom. The grimy bar. The dark sitting room of an old country manor house. When these get shoved together — dingy music venue and black box theatre — something goes wrong somehow.

One of the shows there this season is an adaptation of Moby Dick (I worry for my beloved poor Melville) and as we sat there waiting for the show to start it already seemed better suited to that show. ‘I can see it working as a ship,’ Viv said. Looking around at the benches and black ceilings, smelling the scents of long-stale liquids, I agreed. The space will work as a ship.

At the end of the show, such as it was, the venue’s director or some such self-appointed title came to the stage to convey, in a quiet monotone, his excitement. He used the words ‘share’ and ‘sharing’ so many times it became even more difficult trying to stifle the giggling laughter that had started at the utterly baffling end of the play. But I can see the potential of the place, and maybe it’s good that they’re willing to stage such plays. It gives the Bristol theatrical circuit a place for the weak gazelles.

And maybe I’m just overly critical because I’m generally pulled towards more polished drama. As a television enthusiast, my preferred dramatic writing has had to pass a good deal of quality control. Even the worst television drama will be of a certain quality. Commissioning editors and producers have more on the line, and the financial realities won’t allow for ramshackle scripts to get in front of audiences.

This isn’t to say that all television is great, nor that there aren’t any ramshackle television programmes. It’s to say that it’s less common, and that the two-hour play I saw the other night would never get to be on television. (Although there’s also a good chance it wouldn’t ever get to be staged at a theatre that doesn’t smell of piss, with occasional methane bursts that I can only think were timed along with toilets flushing on higher floors.)

But there was so much influence of television within the play, down to a scene break (complete with a stage blackout) that can only be seen as an ad break, with the lights coming up a moment later for the scene to be completed with no actual break in the action. The end drew in elements of police procedurals, heart string-tugging dramas, and trashy chat shows. Rather than real world research, the play’s content was informed by a week’s worth of being planted in front of daytime Freeview programming.

My concern in all of this is what it says about the potential future of theatre. I’m a firm believer that it’s needed, and that even the best creativity in film and television can only be two sides of a triangle. There needs to be live theatre to keep the whole of drama sharp. So if something like this is being staged, and if a venue like this is staging thing, what the hell is going on? What happened to quality control? If any hack can get a play staged now, what are we to do? (I fully recognise the irony of writing this complaint in a blog.)

I’m no great critic of the theatre, but I can speak with some authority about dramatic works in general. As such, this show has left me somewhat despondent. How can there be any value to drama if something so bad is allowed to reach an audience? Is every medium of drama equal to its lowest example?